Here is Vodka Lemonade, starting to look like a real sweater. Apparently, all of the math-fu I did to get the gauge and the fit right is working, because so far, it seems to be spot on.  I'm very excited!

It's slow going.  There never seems to be enough time!  I knit a few rows at night, but I've been burning the candle at both ends, so you're going to be seeing this one in progress for a long time, I'm afraid.  I'll probably cast on a couple of projects so I have enough to carry around on several trips later this month and in July.  Like always, I'm doomed to be an attention-deficit knitter, working on several projects at once, instead of finishing the one on the needles. If I had any spare time at the moment, I would lavish it on dyeing yarn in colors inspired by my garden. It's gorgeous out there, and I'm drinking it all in, because we've got to redo our back deck later this summer, which is going to cause lots of dislocation, if not outright carnage.  I've taken a few pictures to remind me of the colors when I do find some time to dye.  In addition to the lovely flowers above, I'm amazed by this Borage. And by the bee drinking up nectar from my Asclepias. 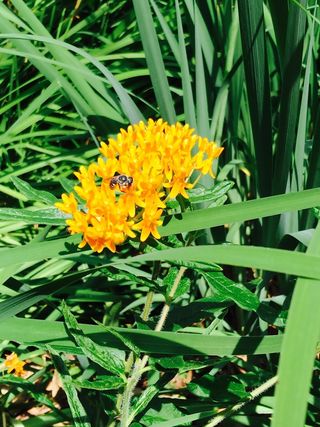 Have you ever seen anything prettier?  Nature is putting on an amazing show for us this year.