As most of you know, we spent two weeks in April on a study trip (cleverly disguised as a vacation) to Israel and Jordan.  It was a wonderful trip and we learned a lot.  And, because of lots of travel time and some wickedly long layovers, I got a lot of knitting done. 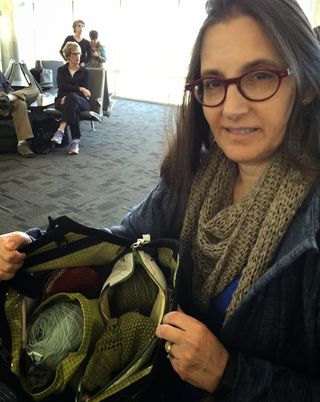 This is me during our five hour layover in Charlotte, after completing the first of three flights it took us to get to Tel Aviv.  At the time I was not amused, but when I realized the husband had brilliantly snagged seats that reclined into flatbeds for the overnight segment of the trip, I felt better.

In my bag: Antarktis (the blue), Vodka Lemonade sweater (the green), my Frostline shawl (you can see a bit of red peeking out in the back), and a couple of squares for my quilt from hell that will never be finished  Barn Raising Quilt, which you can't quite see in the photo.  Although the full bag of knitting may seem like overkill, I finished two of the four (Antarktis and the quilt squares), worked on Frostline until I ran out of yarn, and got in a few inches on Vodka Lemonade.  More on all of that progress after I catch up on the time change, but I did want to share two photos with you before I get some sleep. This is me, happily knitting on our balcony in Jerusalem in sight of the walls of the Old City.  This became my early morning routine every day, and I was grateful to have a project I could work on while looking around and drinking in the beauty of my surroundings, without needing to pay lots of attention to the knitting.  It was amazing and moving, as was the entire trip. This photo captured an unexpected moment of knitting poignancy, that would have taken my breath away if I had any left at all while visiting Yad Vashem, the Holocaust memorial.  It was an extraordinary and emotional experience. We came upon this exhibit, which told the stories of those who had survived in the camps, only to be forced into a death march as Hitler's forces realized they were losing the war.  One of the exhibits showed a beautifully knit, stranded glove, among pictures of some of the people whose stories were told.  It noted that the knitter made items like this to trade for food and took it along with her on the beginning of the death march.  I can't capture my feelings in words, but wanted to share this photo with my knitting friends.  On so many different levels, it's both heartbreaking and hopeful.