I'm progressing on my Paint Brush Hat, which is now well into the colorwork. And, my Sjølingstadkofta sweater is also breezing right along.  I'm a bit further along than in the photo, below. I've finished the collar ribbing and the portion of the collar that is knit flat, and have now joined in the round and added stitches for the steek that is in my future.  I'm knitting on new-to-me needles that my LYS recommended, Hiya Hiya Sharps, and although I didn't like them at first, we are now BFF. They make immaculate increases and wrap & turns (especially when it comes to lifting the wraps to hide them, which I do this way). I've been negotiating with myself over who comes along with me this week.  I've got too very long flights.  I'm frankly a bit nervous about running into trouble with Sjølingstadkofta, so I don't want to travel with just one project.  I think Grannie Annie, which takes up less room, likely gets to come along, while I leave the hat at home.  I hate to do that as it's a wonderful pattern and I could finish it on this trip, but it's just too large at this point.  Hopefully I can knit a bit more of it at home and take it along to The Plucky Knitter's retreat, Glamping, at the end of the month. I finished Vitsippa.  It now goes into the category of memory-knits, because it will forever be the project I was knitting when I was here. (Glacier Park, Montana) It is also one of those knits that is infinitely enjoyable — the pattern is well written and easy to follow for a project that looks rather complicated.  At the end, you're left with a feeling of great satisfaction.  And, it was a skill builder for me as I'm trying to improve my fairisle skills to get ready for knitting this sweater.  I enjoy stranded knitting, but I'm still working on the evenness of my stitches and on feeling completely awkward with the whole knitting with the yarn held in two different hands thing.  Vitsippa helped a lot with both of those issues. As soon as I finished, I immediately wove in the ends and put Vitsippa on my head.  And didn't want to take it off, even though it's over 90` here.  I had no trouble finding a model for it.  In fact, before I was done, everyone in the house had it on their head.  The ribbing is deep and stretchy (I hate it when there isn't enough ribbing on a hat).  I used a long tail cast on, and it worked perfectly.  The finished hat is comfortable, beautiful and not too tight — pretty much the hat you're going to reach for every time you hit the trails all winter. I started Olivia at the end of November, but promptly set her aside to get some final holiday knitting done.  Fisherman's Rib has been slow going for me, but I really like its plump, cushy effect. I'm hoping to spend some quality time with Olivia and conquer the short row technique necessary to finish her off this month.

Because I'm like this as a knitter, I hit a Cast-On-All-The-Things streak the last two weeks in December and set up a number of other projects to include in the KAL: Wish me luck, ok?  January is always a busy month at work for me, so this may be my knitting for several months, rather than just January.  I'm really happy to have it all on my needles and ready to carry with me for delays and lines.

Finally, a sad note to the start of the year.  Longtime blog readers (that would be you, Mom), know that we have four cats.  Our beloved black cat Squirt, the oldest of our cats, passed away peacefully but suddenly.  I'm going to miss his affectionate nature and loving support for my knitting — he enjoyed the holidays and was especially fond of having me sit on the couch for hours at a time and bat balls of yarn around for his pleasure.  I'm going to miss him a lot, but am really glad he sat for one last family photo shoot a couple of weeks ago. 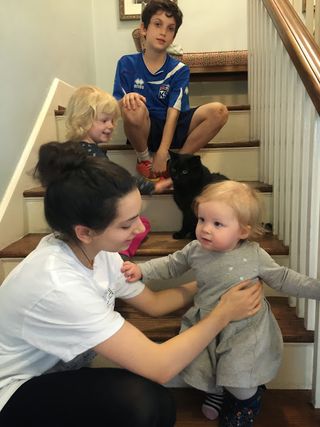